I’ve arrived, an incredibly long day which commenced with me packing, unpacking, discarding a few more items and repacking. I made it to the airport without incident which is always a concern after all a crash on the way really could put a spanner in the works. Check in, I was warned to be prepared for, know where you’re going and when, there was a pressure not to mess up. Thankfully I had printed off all my planned flights and visas. It turns out you can’t just leave the country without having some idea of when you’d return. 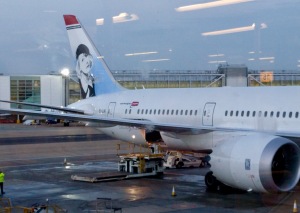 Then a quick coffee, scoot around Duty Free and to the departure lounge where I’m greeted by my travel companion Greta Garbo. Norwegian Air have decided to name their airplane after an actress who was born in Sweden and died in New York? Greta is a stunning as you’d expect an airplane to be. Onboard there are large photos of her adorning the walls. My only concern was the man walking around beneath her with a torch but apparently this is perfectly normal.

I’m travelling in a Dreamliner 787 which is enormous and to make it even better there is a spare seat next to me. When you’re flying for nearly eight hours the more space to unpack and spread out the better. My choice of a gluten free meal was acceptable too,salmon with vegetables, a fruit pot and salad. They serve the special meals first and I did feel rather bad at tucking into mine before anybody else had received theirs.

We landed at 7.45pm local time and somehow I managed to be first off the plane! The next hurdle would be immigration control and boy did they ask questions. It didn’t help at the time that my popping ears were blocked and my head felt like I was underwater. The immigration officer took my passport and looked at the photo. ‘Have you been working out ma’am?’, I responded that yes I had. Now I was rather concerned that he would turn me away due to the fact I look a little different to the photograph, then the questions, oh my word. Where are you going, how long for, when do you go here, why are you here, are you travelling alone, how much money do you have on you, when do you return home? The questions went on and my paperwork was checked. Then, then when I felt really guilty and like I’ve done something wrong he tells me to make sure I leave enough time to travel around all my destinations!
Once through immigration I ‘hail’ a yellow cab (I didn’t really, it was waiting in the taxi rank outside but hail sounds so American). The driver threw my case in the ‘trunk’ and off we went. It took a while before I could see snow by the side of the road and cars still covered too. We drove past a hotel about five floors tall with an illuminated multicoloured Eiffel Towel on top. Over the Queensborough Bridge into Midtown New York. It’s a bit like being in a film set. The building styles recognisable, trees encased in little white lights, the rows and rows of tall buildings, the guys out working on the roads in their yellow jackets, blocking roads off in a very unenglish way by just stopping the traffic without warning and placing cones there. People try to open the cab door to get in when we stop. The driver gets cross and says, ‘everyone here is in a rush’. So much to take in. I arrive at my hotel, check in and order room service before turning in for the night. The end of a very long 22 hour day.

2 thoughts on “You have arrived at your destination.”