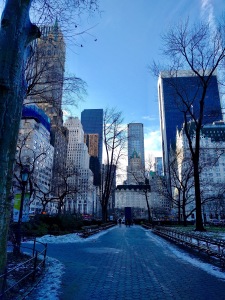 My first full day in New York City. I decided that today would be the day to visit 5th Avenue and hit the bucket list of shops. As I leave the hotel for the first time I become aware of sirens, people everywhere, steam rising from the under ground heating system and the blue sky. I turn the corner and I’m greeted by the vastness of the streets and buildings. As I walk I become aware of a significant number of NYPD on the streets, standing in the middle of the road, whistling with their lips to indicate to drivers to move or stop. I notice an area closed off with a film crew setting up for a shoot. The further toward 5th Avenue I get the more I am aware of the number of police around me and that there is one officer(or more) at each intersection controlling traffic. I walk further down and as I do it gets busier and busier. I reach a crossing where a police officer is holding a chain across the junction to prevent people walking. There’s another on the opposite side and I realise there are barriers around me too. I spot a huddle of camera crews, protestors and armed police. I look up and see Trump Towers. The officer releases the chain and we move across in a cluster. ‘No stopping, move on’, is bellowed as we do. Apparently Donald Trump is holding a press conference here today. I wonder if he comprehends the chaos he’s caused with cars gridlocked and people jostling for space on the pavement. I become aware that although the sky is blue, it doesn’t reach the pavement due to the tall buildings and that sun right now is needed. I walk along 5th Avenue to Central Park.

Central Park is a haven in New York. It may be winter and the trees are bare but it is relaxing in comparison to the centre of New York. There’s snow on the ground still left from a heavy snow fall a few days ago but it is strangely mild. The views looking back from the Park to Manhattan were nature meets imposing architecture are amazing. I meander through the park. There are different paths for cyclists, joggers, walkers and cars. You need to be aware of what’s going on around the go across the road ways. Cars cut through the park via tunnels keeping the park pedestrian friendly. As I walk around I see Loeb Boathouse infamous for its dining views over the lake which has iced over. A teenage boy has climbed down onto the ice and lies down, whilst the staff at Loeb are shouting to get off. He ignores them, lies right back and takes a selfie and then leaves.

I walk through the park looking for Alice. On the way I see street sellers setting up stalls ready to sell art work and magnets. The are homeless people here too, pushing trolleys full of their belongings and accommodating the row upon row of benches. I spot Alice on her mushroom with the Mad Hatter. The sculpture of Alice in Wonderland was put in the park in 1959 as a gift to the children of New York City. This impressive bronze statue has become polished over time due to all the visitors who have climbed the mushroom. Running around the statue in the ground were bronze plaques with quotes from Lewis Carroll’s poem Jabberwocky. I leave Alice and walk around the park some more before returning to join the craziness of 5th Avenue and return to my hotel.

In the evening I venture out again. Instead of turning left I turn right out of my hotel and within 30 seconds I’m in Times Square. I now realise why I hear noise from my hotel. Times Square is swarming with people, selfie sticks and a deafening din. There illuminated signs that cause a midday glow and more NYPD with their vehicles. I wander down south 7th Avenue where Times Square is and eventually see Macy’s. Although I’m not really a shopper I feel it is my duty to venture in. The store is vast. The ceilings high, lots of staff offering help, clothes on display methodically and so much space between the aisles. I walk around the store for a while but leave empty handed. After all I have a date. 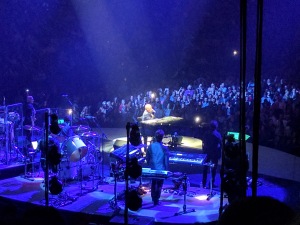 Just along the Avenue from Macy’s is Madison Square Garden (singular). No as I was informed it’s not a garden and neither is it open air. It is an indoor arena. Billy Joel (my date) has been here every month for the past three years and tonight he’s back again. I have booked myself into section 113. A little research told me these were the best value seats as although they are behind the stage, the performer can rotate 360 degrees. It was amazing to think that one his 37th month of playing the arena is packed out. Billy Joel no longer hits the high notes by his own admission but is a fantastic pianist and showman. Numerous times during the show the audience were asked to choose between two different songs with the loudest cheer winning. He seemed to ad-lib songs too, adding to the whooping of the crowd. Impromptu versions of Ruby Tuesday and Layla where included as well as the classics; The Piano Man, New York State of Mind, Scenes from an Italian Restaurant and others making a total of thirty songs! The applause and atmosphere were astounding. I feel so lucky to have been here to see him perform. A 20 minute walk back in the rain and day one of my travels was complete. I’m shattered.

‘Sing us a song you’re the piano man, Sing us a song tonight,Well we’re all in the mood for a melody,And you got us feeling alright.’ Billy Joel, The Piano Man, 1973.
(Title from Alice in Wonderland by Lewis Carroll, 1865.)