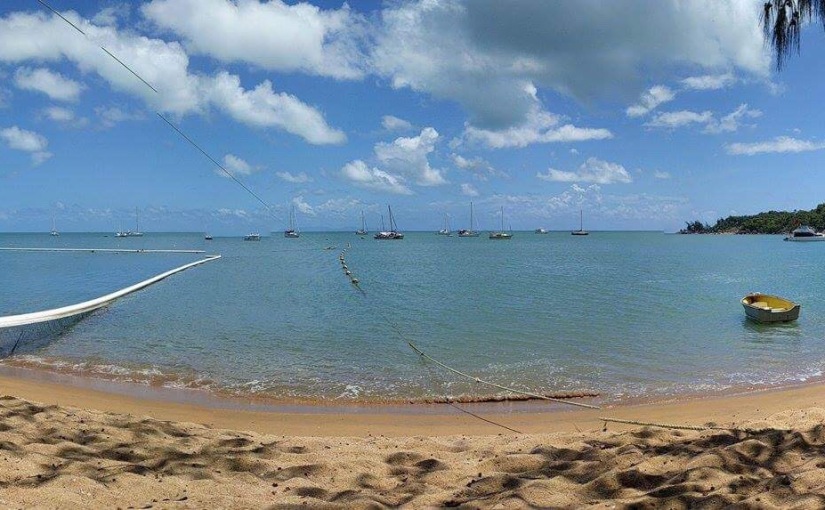 We board the forty minute journey on the ferry in the early evening towards Magnetic Island. Our site for the next few days is in Bungalow Bay Koala Park. There are very few people here, although it is the low season it is still very warm. With no one around we spot an isolated outdoor shower made with corrugated metal and pitch up nearby. This proves to be useful providing an opportunity to cool down during the hot days ahead.
A ten minute walk takes us to Horseshoe Bay. Here there are a few shops, restaurants and bars. The beach is sandy and there is a swimming net to keep us safe from the crocs.

Further on from Horseshoe Bay is a rocky track. From here two remote beaches are accessible although they do require some stamina to get to them. We chose to walk the 2.5 km path to Balding Bay, a hike up and down hill over boulders and stones which is challenging in flip flops (I’d recommend trainers). The boulders house geckos and I’m an convinced a snake slithered under one as I approached. At the end was the sandy isolated bay. In hindsight the name should have given away that it was a nudist beach.

We also hiked 4km to the Forts Walk. A World War 2 fortification which has great viewing points down and over the island and bays. At the top of the walk is a tower with a 360 degree view around the island. On our descent we were told that a koala had been seen and that the path was marked by a stick. Thinking that was a great idea I kept looking out for a pointing stick, which in a path with a lot of sticks was not easy to see. I did spot a Koala not far from the path, sleeping low enough in the tree to touch. It’s a long walk in 29 degree heat so lots of water is needed.

At the camp ground is a Koala Park (hence the name) as well as a lot of free roaming wildlife. In the evenings we were surrounded by cockatoos, Rock Wallabies, raccoons and possums. The Koala Park is open for tours at specific times. They run a breakfast with the Koala event a few times a week if there are enough bookings. Unfortunately for us they didn’t and so we joining the general tour. The ranger was very informative, telling us about the environment and the animals. She took our group of eight around, for two hours and encouraged us to hold the animals. This was met with apprehension from some especially me when she seemed to realise my fear of lizards and crocodiles and asked me to carry them back to their enclosure. We were introduced to and held baby saltwater crocodile, numerous lizards, mischievous birds and a extremely long, heavy python. For a small fee I had a photo taken with a Koala which sounds easier than it is. The young koala was more interested in his surroundings rather than posing for the camera. The animals are well respected here and never pushed to perform.
If you join the afternoon tour, you are invited to feed the Rainbow Lorikeets at 4pm. They seemed to know it was feeding time on our approach and swarmed into the trees ready to feast.

Magnetic Island was incredibly hot. The parts of the island I had time to explore were well worth the ferry ride here and if you love animals it’s a great place to visit.